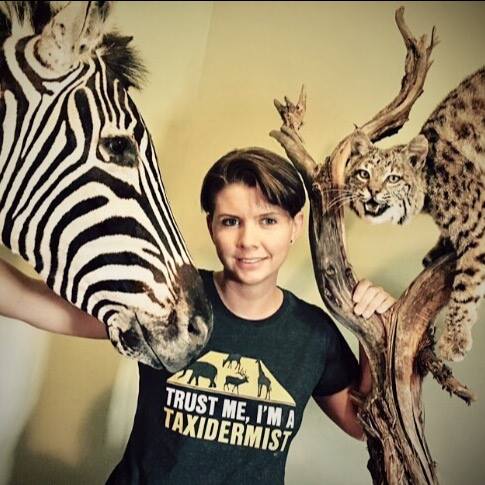 Taxidermy has interested Amy since she was 13. “Now, I had never been a girly-girl, and had always had unique interests and hobbies as a kid growing up, so picking up taxidermy as hobby came as no great shock to my family. It all started one day while out on the family farm, I came across a dead King-snake. I thought the pattern of the hide was so interesting I wanted to turn it into a belt.”

Amy was home-schooled, which equipped her to be great at learning whatever she sets her mind to. She went straight inside and researched how to tan a snake hide.

“While I was researching, I came across taxidermy websites and instantly realized that taxidermy was something that I wanted to try. Early on, I practiced on whatever I could get my hands on, particularly road kills, and rat that I raised for my pet snake’s food. As I became more involved, I made friends with other taxidermists who began to donate better specimens for me to practice on.”

Taxidermy was just the right fit for her as a kid to get started in. The price for a license varies from state to state – and where Amy lives it was only $15.

“As a kid starting out, I had very little funds and was able to use as many common household supplies for my taxidermy, as well as making my own bodies for small animals out of things such as newspaper and tape. While these days I don’t advocate doing it the archaic way that I started out, it was fun and making my own body forms from scratch forced me to learn a lot about animal anatomy.”

“Many taxidermists are open to taking on apprentices, and that can be a great way to learn. The optimum way would be to take a taxidermy course with a qualified teacher, which can range anywhere from a couple of days to a couple of weeks long depending on which course you choose.” 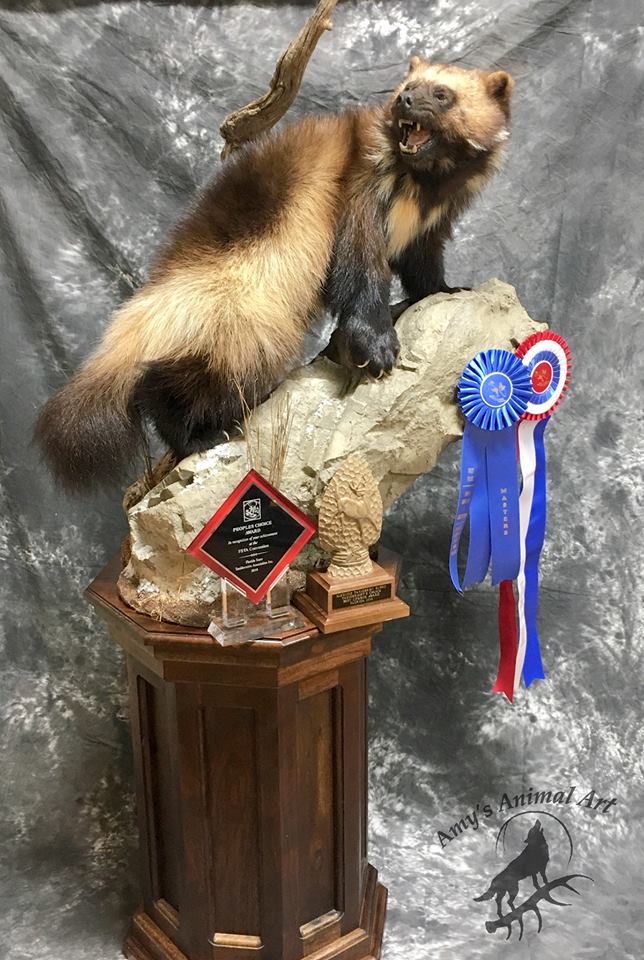 Amy has come a long way from using newspaper and duct tape – now she is dedicated to educating others. “I recently began teaching my own taxidermy classes, and they have been very popular, especially among women who may feel safer or more relaxed learning from another woman. I would also suggest joining your state taxidermy association and attending their annual convention. There you can meet other taxidermist, attend seminars on a wide variety of topics, and view some beautiful examples of taxidermy.”

More and more women are showing interest in this art form. When Amy first got started there were just a few women taxidermist in the field. “In my experience, I received nothing but kindness from male taxidermists I met. They saw me as a bit of a novelty, yes, but were eager to help me learn more and I owe them for where I am today. I also get a great amount of respect from my customers, many who come out of state to bring me their trophy. I attribute this to the quality of work that I do, not just because I am female. Several customers have mentioned their trust ‘of a woman’s touch’.”

“People do tend to see a female taxidermist as a curiosity and I believe this helps me in a very positive way… I have a large following on social media, more so than many of my male counterparts. I’ve sensed a bit of jealousy in this area, from other taxidermists – even though I want to be known for my talents and not my gender… but if it helps promote my business, I won’t complain.” 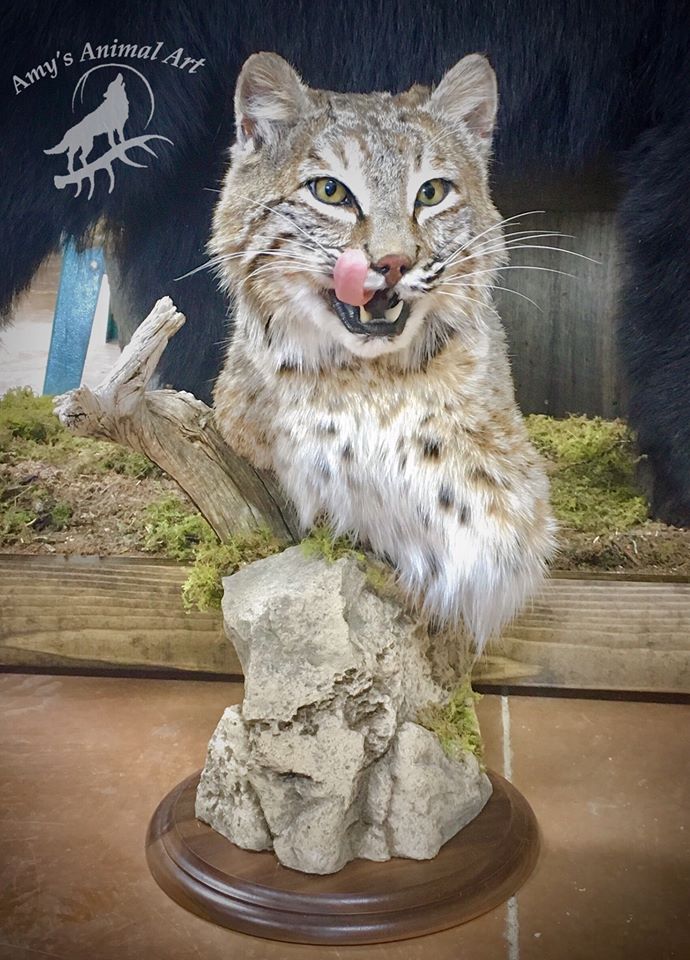 Amy is indeed talented. Her bobcat head mount with his tongue sticking out is absolutely remarkable. Most tongues that I have seen in taxidermy are so fake looking they are laughable, but this looks very much alive.

Amy used to do pet taxidermy. She has chosen to no longer accept any, due to the close connection people have with their pets, and the sensitive emotions surrounding their death. “I had one fellow call me one night and tell me that he was brining his dog to me. As I went to hang up the phone, he said ‘I’ll be there just as soon as I can dig him up’. Sure enough, the dog had been buried for a day before they decided that they just couldn’t let go!”

She had a lot of really funny stories. “I had a lady who wanted her cat turned into a rug, and the remains shipped back to her, all the way to Hawaii. From what I heard, there was a lavish ceremony with music and rose petals, and they tied rocks to the carcass and threw it into the sea…. And there’s always the occasional call for someone asking if I’ll stuff their Grandmaw.”

Her art goes beyond traditional taxidermy. She mak 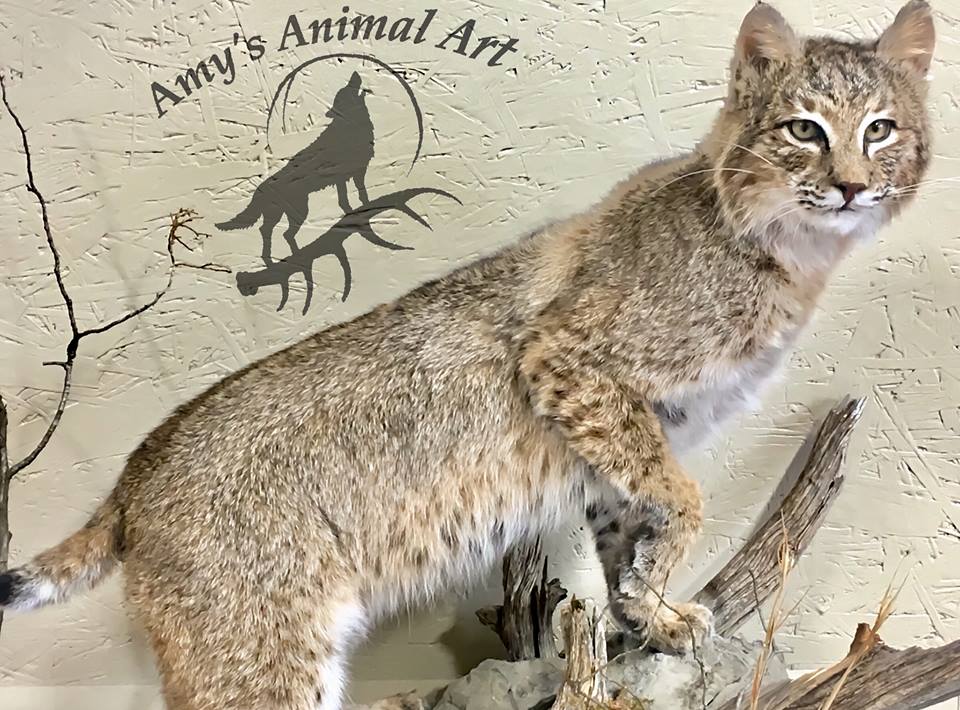 es fur pillows; upholstered stools; antler carvings; jewelry made from bone, teeth, and claws. “I support any form of taxidermy – after all, it is preserving an animal that would otherwise just have rotted. There’s something really cool about that!” Her style tends to be mainly traditional, but a lot of her woodwork and habitat bases lean towards the modern trend of less-is-more. “I like to showcase the animal and not necessarily clutter the scene with too much grass or other material.”

Amy has had her share of trouble from animal rights activists, who seem to love to give her bad ratings on Facebook anonymously. She responds to them kindly, by asking logical questions but never gets a response. “There will always be those that don’t agree with hunting, and the taxidermy that comes from it. To me, I see it as a beautiful way to use EVERY part of the animal. Ethical hunters respect and use as much of their game as they are able to.”

And it definitely takes someone who respects wildlife so much to be able to stuff them in such detail that they seem full of vibrant life. And the bobcat standing perched on a log – it looks like it has just paused a moment to watch its prey. It’s hard not to hesitate a moment, almost half expecting it to complete its step.

“I’d say the hardest part of taxidermy is properly preparing the hide. Most people think that laying the hide over the body from and sewing it up would be the most difficult – but that just isn’t true. That tends to be the easiest part for me. Many more hours go into skinning, fleshing, thinning, and otherwise preparing the hide to go on the form. Each new piece presents a new challenge for me, which is part of the fun. I try something new every time. For my first mountain lion, I carved the foam from scratch using a large block of foam. It was the largest form I had ever made by hand and it was a pretty big challenge.”

Several of her pieces have award ribbons hanging from them; testimony to just how great of an artist she is. “I go to a lot of taxidermy competitions. In fact, I’ve been competing since I was 15 years old. I’ve been to most of the state shows in the southeast, as well as nationals and world competitions over the years. My top awards have been National Champion (NTA 2003), North American Champion (Big Rock Taxidermy Competition 2015) and a second place ribbon at the World Championships (2015)”

Amy’s art is just incredible. She really is one of the very best in this field. “I encourage women to explore their interests, and not be intimidated to jump in and get their hands dirty in a male dominated field! You just might find that women have that extra special touch.”

It has been a remarkable week getting to learn about these amazing women. They are wonderful artists to look up to, not only because of their talent – but their character, dedication to their business, and drive to educate others. They each have noted that being female isn’t a hindrance, but can offer a unique perspective in this field, and that the Woman’s Touch is a beautiful complementary addition to the world of taxidermy. After hearing about their journeys, I can’t wait to practice on a critter myself.