Hen of the Month

Hen of the Month, Angie Kokes, is 43 years young and has hunted nearly her entire life. She was just 3 years old when she first shot a gun, a 12 gauge that knocked her on her butt! Growing up, she tagged along on with her father who was an upland game bird, waterfowl, and coyote hunter. Angie said, “The best part about that, is now I get to take him with me!” While her dad didn’t hunt deer, she still developed an interest. “My dad lined up a friend who took me out one time, from there it was a crash course learning on my own.” she said. 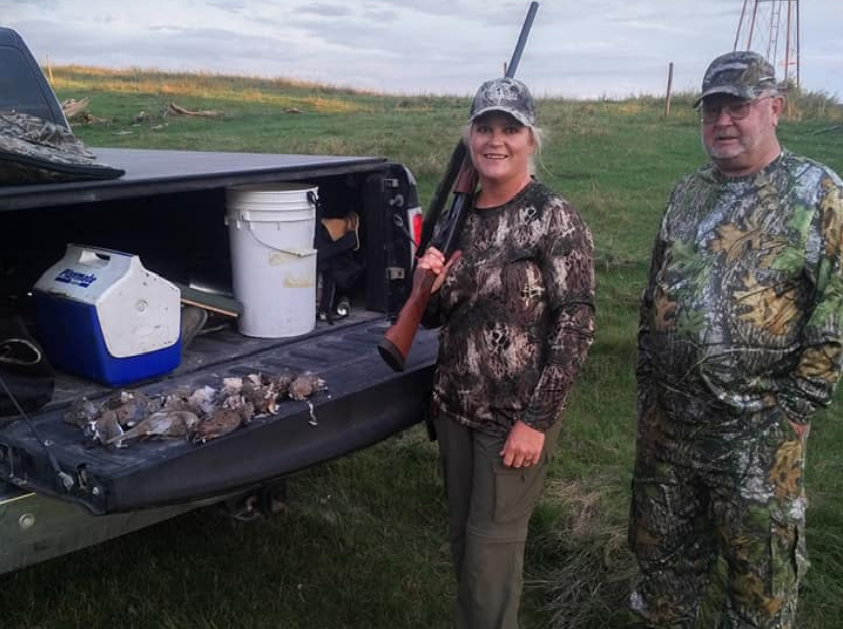 After many successful hunts, Angie was longing for something to make hunting deer more of a challenge. So Angie decided to try with a spear. She said, “When the spear came up, I wanted to take a bear, but my first outfitter suggested I take another animal before I take on a bear. After my first spear harvest, it was hook line and sinker. And all I can say is, it’s the hardest, most frustrating yet fulfilling way to hunt.” 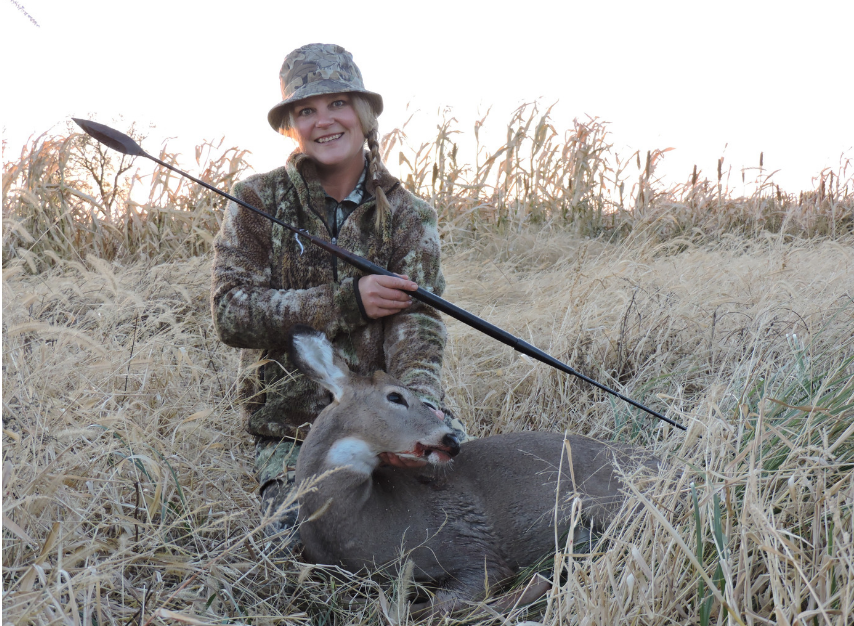 Angie and her husband love to share their knowledge and get others involved so they regularly host kids and new hunters out to their place. “It’s supposed to be us teaching them but usually we end up learning more right along side of them.” she said. 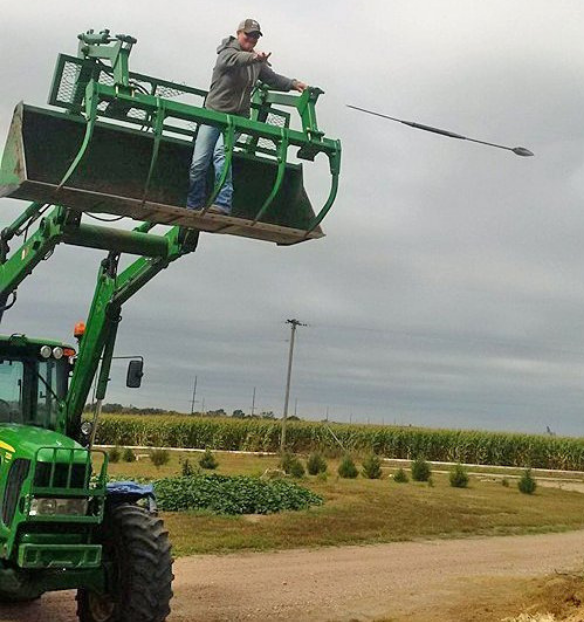 Here is a short story by Angie:

While I will admit to praying, and possibly begging once or twice for an easy button in my life, easy really has no place in the realm of Angie. Some call me crazy, say I need my head examined, or I should be put in a padded room. But the tougher the challenge, the more I am inclined to dive in head first. If something’s worth having, it’s worth the work to get it. But in the spring of 2013, I collided with a freight train of a challenge that derailed me and changed the course my life had been barreling down.

A cowgirl, team roper, and told by many I was tough as nails I thought I could handle anything thrown my way. I’d been through multiple surgeries and a couple dozen broken bones already and in 2007 I’d walked away…literally, without going to the hospital or doctor from a horrific wreck with a colt that when months later I did finally have an MRI we learned I was lucky to be alive. The injuries revealed included a 4.5” skull fracture, 2 broken vertebra, C6 and C7, multiple tears in my right rotator cuff and a broken left foot. While this was a horribly painful and long recovery, it didn’t slow me down much. I had even roped in a USTRC roping 10 days after the wreck had taken place, and so I was feeling pretty invincible at this point in my life. What doesn’t kill you makes you stronger, right?

Fast forward to 2012 and I was fully recovered from the horse wreck accept some daily aches and pains that one would expect someone as hard on their body as I am to have. I was team roping regularly and had just ridden my spicy little mare Gypsy through a ranch horse competition that contained an extreme trail event. My husband Adam wouldn’t even come watch that part because he said he knew I would ride it like my ass was on fire and he didn’t want to see me kill myself. I’m pleased to say Gypsy ran that course as crazy as I wanted her to and it was a wild ride! So shy of a couple freshly broken ribs that bit a little, life was barreling along my tracks just fine. And then straight out of the blue one day my right arm started to hurt.

It caught me really off guard as normally I remember what stupid stunt it is I’ve tried that has gotten me hurt, but I really had nothing for this one. I ignored it as much as could, but this pain hated me, like it had a vengeance on my very being. Burning, throbbing, aching, biting like I’d imagine a big ole wolf bite would feel like. When I could no longer pick up a toothbrush without wincing in pain I went to the doctor and was told I had tennis elbow. What the? Are you kidding me? I don’t even play tennis! And what a lame injury to have disabled my arm, just stupid! These thoughts and more buzzed like a swarm of angry bees in my head non stop for days.

Physical therapy ensued with no results, and my once muscular arm was shrinking. We tried as many rounds of cortisone shots as one can get in a year and while they did dull the pain, when it came back it ravaged me. Almost 9 months in what was left hanging at my side didn’t even resemble much of an arm anymore. More like skin hanging off of bone. The only way I could move it was to pick it up with my left arm, otherwise it was a dead stick. And I finally had to admit the surgeon we had met with a few times earlier had been right. When I had refused surgery a few weeks earlier, he simply turned to Adam and said, this is not a matter of if she has surgery, but is a matter of when she has surgery. Everything is set up, so just call when she is ready. And she will be ready at some point. And that point had come, my stubborn was even exhausted with the relentless pain, to the point I really didn’t care if they just cut the arm off, and so the surgery was scheduled.

Once under the knife the surgery did reveal damage to the tennis elbow nerve, but it also revealed a torrid of other damage. A bicep tear that unassumingly caused the tennis elbow, and swelling from it also diminished blood flow to my forearm, atrophying an ex-tensor there. Through a fog and shock in recovery I heard the surgeon say we had to remove a lot of dead tissue. And I guess in case I hadn’t heard him the first time, he followed it again with A LOT of dead tissue. And sometime during the explanation of what sounded like the Hiroshima bomb went off in your arm I heard the words two years, recovery and no bow again. My body was vibrating and numb all at once, I should have wanted to cry but all I wanted to do was puke. For the first time in my life something had slowed me down, heck as far as I was concerned at that moment, that something had just as well killed me.

But I have Adam, a husband who while might be terrified of what kind of crazy ideas I’m going to come up with and pursue, still pushes me. And while angry I still had hope and hope a little drive is all I need to push me. Two days post surgery Adam filled the pickup with guns and stated simply you’ve got a left arm, we’re going to get this figured out. And so that is how the next several months went, figuring out how to be me left handed. Fortunately for me, but not so much for the turtles who had infested a pond on our place that summer, I spend hundreds of hours sitting on it’s banks and eliminating turtles one by one with a .22 long rifle, left handed. Every time I would get down Adam would come up with a new “project” for me to try left handed. Yet all the while September and bow season crept closer and closer, and the thought of not being able to shoot my compound bow consumed me. This was one thing that bothered Adam, not because I had a crossbow so I could still hunt, but because he knew I was going to push the envelope and do whatever it would take to shoot my compound bow again. What I don’t think he could have ever imagined or even dreamed I’d want to try to do with a rotten arm was spear hunt. But when you’re knocking on the door to impossible you just as well kick that baby down. And so that’s what I told him. I want to spear a bear! He never asked why or discouraged me, just built me a spear and said let’s get through the next few months first okay?

And so began the excruciating therapy to rebuild my arm. There were days I thought for sure I was sweating pure blood, days I would do way to much and then consequently pay dearly for most of the next week, but ever so slowly my muscles, minus what was removed were coming back along with my strength.

A few months prior to surgery in my mind I guess I knew what was coming so I had turned the poundage on my bow down to 40 and sighted it in to be ready to hunt after a tennis elbow surgery, but not counting on all of the other damage. Still, my bow was ready and waiting for me that fall. To make Adam feel better I did carry the crossbow and my compound bow, just in case a monster would walk out and I couldn’t draw. I hunted all season with both but never pulled the trigger on the crossbow and I only drew my compound bow back and shot one time to tag a doe. Mentally and physically I don’t think I could have forced myself through the pain of drawing a bow again that season. I threw up and almost passed out in the tree stand from just that one draw and I wasn’t in any hurry to do it again.

Even so, I was elated to have accomplished that one shot and I knew it would only get easier and I would only get stronger with each passing day.
One thing that never came back great was my ability to swing a rope. And in the summer of 2017 I got the news that no cowgirl/team roper wants to hear. From the repair done to my forearm in the last surgery and the subsequent rebuilding of my muscles there, a different nerve had become entrapped and damaged. Most nerves are supposed to look plump and white, mine is thin like a hair and black. I was told the chance of it severing are extremely high and if it does the game with my right arm is over. What you might ask would hurt this nerve? Swinging a rope. And so just like that I was no longer a team roper. A path my life had gone down for so long, had just vanished with the breeze. It gutted me, I won’t lie. But my arm still works and hunting has begun to take me places I never could have imagined. Like Alaska in the spring of 2018 where I speared a bear with it, just like I told Adam I was going to do five years earlier. I always say, failure is only an option if you quit !